MDMFlow is a hip-hop-inspired make-up line, which I started straight after graduating from London College of Fashion. The lipsticks come in crazy colours, like bright blue and black as well as classic colours like nude and red. They come in gold bullet-shaped casings, which I designed. I wanted to create a brand that women could be really expressive with. I’d already spent six years working in beauty for loads of different brands, starting on the Benefit make-up counter aged 17, and women would often come in looking for a blue lipstick but we didn’t stock them. So way back before MDMFlow was a reality, I always knew there was a gap in the market. Blue was one of the first lipstick colours I created, to give girls what they wanted.

I felt that the beauty industry’s standards were quite narrow from the point of view of expressing your individuality. Growing up I wanted to look like the rapper Lil’ Kim; not Marilyn Monroe or Audrey Hepburn – who were the models for classic glamour on the big make-up counters. There’s also a lack of products for women of colour from certain big brands. So right there, that’s two types of customer that aren’t well catered for by the mainstream beauty industry that my brand could appeal to. 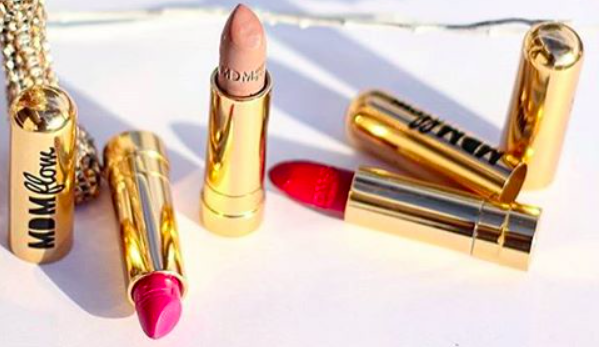 At school I was heavily into chemistry and was planning to study pharmacy. But my part-time job got me hooked on beauty so I decided to switch University plans and go through clearing to do a course that’d allow me to go deeper into the beauty industry. I got a place to study a BSc in Cosmetic Science at the London College of Fashion, which is the only place in the UK to offer a course of that kind. It was a four-year degree, which includes a year in industry. It was a really scientific course, there was biology, a lot of chemistry, only a bit of formulating products. A lot of people dropped out quite early on, who were like; ‘I thought this was a beauty degree! I can’t handle it’. Mid-way through there were even points where I was put off and thought ‘I don’t want a scientific career, I want to go into marketing’. Now though, I’m glad I persevered. I know a lot of entrepreneurs and so few of them studied a subject that they actually use for their business – I feel lucky that I did something that gave so much practical knowledge for starting my brand. Right now, a big selling point with my lipsticks is the fact that they are hand-made and if I didn’t have my degree I wouldn’t have the skills to produce them myself. If I had to outsource it to a manufacturer, it’d cost way more, and be a totally different business.

MDMFlow itself started as my University project. I was making the lipsticks for my final year dissertation when I found out the government gives out loans for certain start-ups and my University was one of the providers. I applied for the start-up loan and I thought to myself ‘if my application is successful, I’ll go ahead and make this business happen’. I got a lot of support from LCF to complete the forms and I did it! After two rounds of applications I was awarded the money. I say awarded, it was a loan and I’m currently paying it back.

Although getting the money enabled me to get the business off the ground in the first place, it did bring pressures of its own. When I applied, I had to fill in the form explaining what I would use the money for and talk about cash flow and margins and things like that but it still felt very much like a school project. When they called me up to tell me that I’d been successful there was a moment of elation, thinking; ‘I’m rich!’ then when the money was deposited into my account for real, I just felt the weight of responsibility and the realisation that it’s not free money, you have to use it to make money and eventually pay back the original amount.

In the attempt to spend it wisely I remember I blew £2000 on a piece of equipment called a compressor. To this day I don’t know how it works and I’ve never used it. When I bought it I must have thought it was essential but it has just gathered dust. I’ve put it on Gumtree and eBay but nobody wants it! It’s a learning curve you have to go through. Now looking back I’m glad I started with 10 grand of investment rather than half a million because it’s easy to waste money when you don’t know exactly what you need because you haven’t started yet. 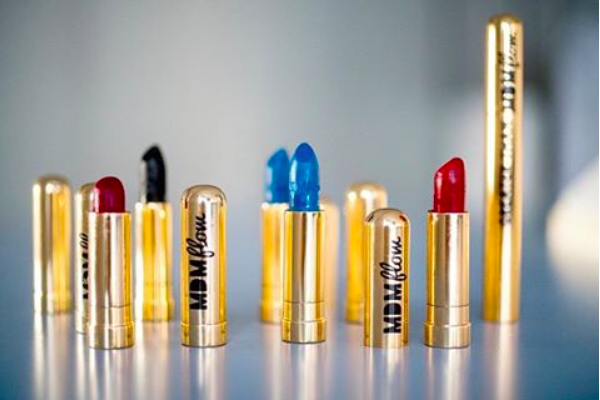 I live and work from home with my family in Essex. I have a laboratory in a large shed in the garden. I make the lipsticks there as well as mixing up samples and creating new colours. Hand-making the lipsticks is an advantage for me because with small quantities I can tinker and change the formulation – which I have done a few times. Starting with small amounts of stock was key because if I’d needed a factory to make the products I would have had to put in orders for thousands of units – way more than I could have sold at the beginning. All my colours have always sold out – I make such small quantities that I always manage to sell them, even the worst sellers, because I can make as few as 20 lipsticks. I think it’s hard to make a bad lip colour anyway because there’s always someone out there who’ll like it, and due to the fact I’m doing unusual colours I don’t have much competition.

Living at home has definitely been a sacrifice. I’m very fortunate to have the chance to do it but I’d been living independently in Brixton and Antwerp when I was studying, so although I like it at home it felt like a step backwards. I just knew if it was a choice between having my own flat or my own business (at least for a while) I’d go for the business!

I probably am making enough to pay myself a salary by this point but I’d rather just plough everything into the business. I have a car and I travel for work quite a lot. If I want to do a trade show or have a one-off expense I can cope with it.

I went to Barbados for a friend’s wedding last January. Although I did the bride’s make-up it wasn’t MDMFlow-related. That’s the only holiday I’ve been on since starting the business and I don’t have weekends or evenings to myself either when things are busy. I built my own e-commerce website. I’d had a Tumblr since I started Uni – I used to keep changing the name of it. Then I discovered Kaoir – such a cool US lipstick brand, and toyed with the idea of selling little-known cosmetics brands that you couldn’t get anywhere in the UK, and calling it Flow Boutique! I didn’t pursue the idea too far but I learned how to build an e-commerce site at that point, so for MDMFlow I just re-used that template.

At LCF, lots of people were using my lipsticks for editorial test shoots so I had some great imagery to use; ready-made content!

I used BigCartel to make it – I knew a little bit of html from MySpace days plus I asked my friend who studied computer science to help me pimp it out a bit. I’d never commission someone to do a job for me and just leave them to it. I’d rather get someone to teach me how to do it so I could maintain it in future and never get locked out, as I’d heard horror stories from blogger friends who’d had their site designed by a third party and subsequently didn’t have control of the back end.

I designed the bullet casings, logo, branding and shot the editorial images for my website together with help from a really close friend who’s a designer, photographer and art-director. I originally wanted her to be a co-founder, but it didn’t work out like that. She knew it’d be me doing most of the work and she said so. When I was starting out I was more desperate for a business partner, but by now I have grown in confidence. However, as the business grows, I’m realising that to expand it further I could do with someone who has expertise in areas I don’t, like manufacturing.

My Dad is also part of the business – he helps me do the accounts. Living at home means it’s easy to schedule meetings with him!

I am meeting with an attorney in LA soon who works with all the major beauty brands and that will be my first lawyer thing. Normally I just Google legal issues and fortunately have a friend who’s a trainee solicitor and I get her to look at all my contracts – I pay her in drinks and lipsticks; I’m amazed I have got away with that situation for this long. 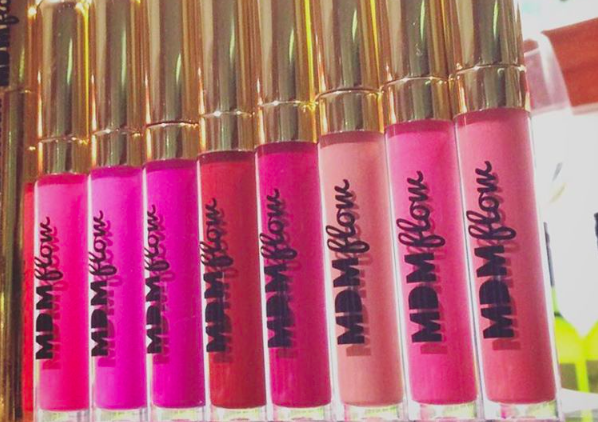 There aren’t a lot of ‘start-ups’ or small independent business in the beauty industry – it’s dominated by very big names and it’s job-rich, for a graduate of my course for example – to go and get an entry level job with a decent salary. I definitely think there’s a need for more small brands in the beauty ecosystem, and maybe now I’ve done MDMFlow other people will look at that and do it themselves. When I started out I didn’t know any other small independent beauty brands, only small businesses in the fashion industry – who’d I’d met on my placement year in Antwerp. Getting to know them and seeing them hustle made me think; ‘I could do that, I could be poor for a little while.’ Upon graduation, doing my market research I realised there were quite a few beauty start-ups, mainly from America. Brands like OCC, Tarte, and Glossier which came out last year, from young, American entrepreneurs so I feel like I’m more part of a trend now and that makes me believe that I can do it.

Networking is so important, and so is finding really good mentors. Millie Kendall is an amazing woman who co-founded the brand Ruby & Millie and has now set up Beauty Mart with her business partner Anna-Marie Solowij, who used to be Beauty Editor of British Vogue. I am so lucky that I got to meet her – I met them two years ago and now I am working with them, as MDMFlow is stocked on Beauty Mart. They are so helpful. It’s great to know people who have been in the industry for a long time, really understand it and can tell you; ‘this is a really great idea, this is gonna work’ or even ‘actually you should cool down on this, or wait until you are a bit bigger’.

As far as disasters or setbacks go, last year I went and got a graduate job because I felt that my business wasn’t really growing and I felt that it was something I needed to do. So I moved to Middlesex to work at Original Editions, who make Eyelure and Elegant Touch. It was a full-time role while I was still doing MDMFlow nearly full time. During that period I had an Indiegogo crowdfunding campaign and a pop-up shop at Box Park and I was so busy. It wasn’t impossible, but I definitely think that things would have worked a lot faster if I had focused on MDMFlow. By the end of six months, after which I quit, I was exhausted. I think during that time I had about two or three hours sleep per night, it was so crazy.