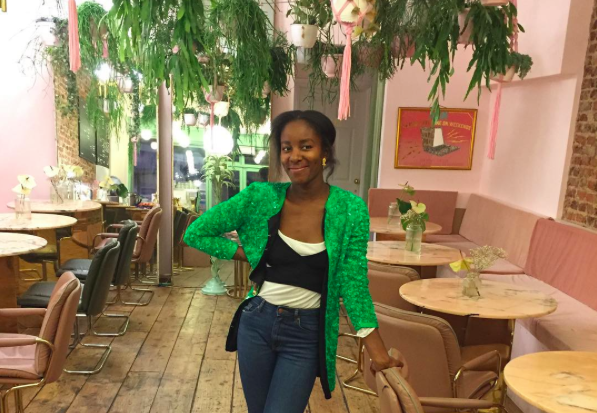 Embellished Talk is an online platform to explore textile designers and the brand name for Rebeckah’s embroidery and embellishment workshops.

Rebeckah; “I founded the site in September 2015.  I originally studied Print Textiles at LCF, graduating in 2007 and subsequently teaching myself embroidery. However I tried, I couldn’t find a job in textiles. I worked in admin and teaching for a few years and continued embroidering in my free time. Then in 2015, still feeling my true passion was surface design and that it wasn’t too late – Embellished Talk was born. The inspiration for the site was a gap in the market for modern, fashion-forward embroidery and textile design. The only equivalents I could find were a bit outdated; I wanted to feature cool textile designers so people could discover them all in one place.

The site wasn’t my first idea. I had wanted to create a range of bags, so I was doing a lot of market research into what customers wanted. Interviewing people was so enjoyable and interesting I decided to pivot and focus on that. The blog started with interviews with designers from everywhere; UK, USA, South America and France, mainly found on Instagram then interviewed via Skype. 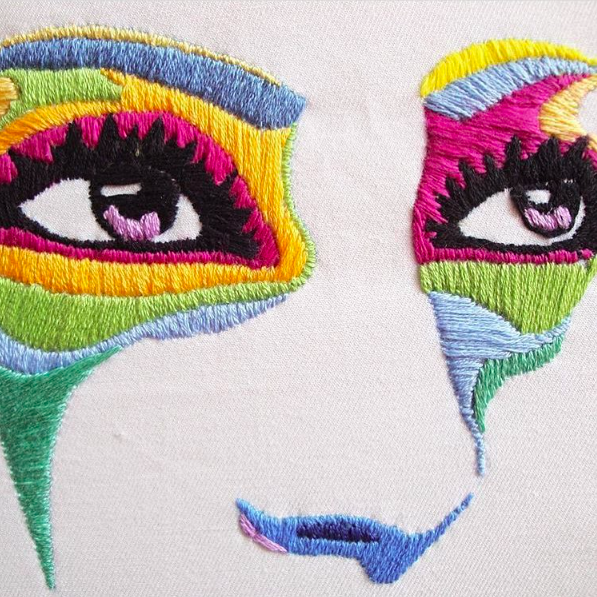 A memorable one was with a lady in her 80’s from the south of America who had lived near Frida Kahlo and told me all about her life – how people close to her had died and how she embroidered to stay positive. Another was an Argentinian lady in Norwich I had a really long chat about pros and cons of Instagram; I enjoyed becoming a part of this online embroidery community. I never get bored of that – I’m always learning and wanting to know more and I love meeting interesting people. I was really shy when I was younger but now I don’t care – I love asking questions.

I made the site through WordPress. I just looked for web design references online then created my version. Paridust website is beautiful – she takes pictures of herself in front of art; also Man Repeller and the Working Women’s newsletter. My boyfriend is an app developer so he’s helped me with that side of things. On the other hand, commissioning out can be challenging – at one point I had a company in India working on my website but it became very complicated as one minute I was talking to one person, then I had to explain it all again to someone else – it works better to do more yourself. Doing my logo took the longest time – I existed for a year without a logo even though I had designed it on paper and in embroidery as I struggled with making a digital version.

As well as building and adding to my blog, I started looking for cool embroidery projects. One of the best I’ve worked on was for Gurls Talk; the social enterprise founded by Adwoa Aboah. I’d admired Adwoa for ages and was reading her website and noticed they did merch, so I contacted them and offered to embroider onto the T-shirts. I wanted it to be collaborative and so asked other girls; Sophia Salazar, Jodie Ruffle, Nicole Choi and Wasima Akhtar and proceeds went to the Bay Tree Centre. I got different friends to model the finished T-shirts and photographers from Instagram volunteered to shoot them. When Gurl’s Talk held an all-day event I had an embroidery workshop there as part of the line-up. I like collaborating – I’ve worked in so many jobs with no control over who I work with, so Embellished Talk is where I can be autonomous and choose people. The blog itself doesn’t make money, so my business model is running embroidery workshops; a mix of paid and for-charity events using Event Brite and Biletto. I set everything up; venues, materials, social media. Maybe in the future this will change but right now I don’t feel confortable hiring an intern (unless it’s for a charity project) and making someone work for free for in London if I’m getting paid, and I don’t make enough to pay someone else yet.

I want it to become full time – I also teach part time. Other revenue streams could include products but not mass-produced ones – just limited-edition pieces, something sustainable. I only started the workshops in June – so I’d like to expand them to eventually be in schools and also take them on tour. To get to work with super cool cafe, Palm Vaults, I did a lot of groundwork. It’s local to me and it’s so cool there are queues to get in on weekends. I always wanted to do something with them – I asked, and kept looking for the opportunity. Then after the Gurls Talk thing I emailed again and mentioned Adwoa Aboah and Sharmadean Reid to get the founder, Hannah’s attention. I offered to do a workshop in Palm Vaults and said it would be really pink.

Sharmadean of WAH Nails once told me ‘if you want to work with someone, its like getting a boyfriend – you have to show off how attractive you are and get on their radar all the time.” It took so many emails and DMs to get to do a workshop there in October, but persistence pays off! I’ve followed Sharmadean and been to a few Future Girls Corps events so it was amazing to get personal advice from her. I’ve learned so much from Future Girls Corp – I’ve been to a lot of business workshops but I always leave those ones with solid information. I was out for dinner with some other girls I met at FGC and we bumped into Sharmadean and I asked her to do a workshop in WAH – I thought I would need tens of thousands of followers but she said yes on the spot.

Even Adwoa was appreciative and super nice; surprising so for someone that big. She once replied to an email after two days saying ‘sorry for the late reply’ I was like – you do not need to apologise to me! Positive feedback from Adwoa, Sharmadean and Hannah at Palm Vaults has really boosted my confidence and spurred me on to do more and approach more people. When I spot somewhere nice to do a workshop I just get in touch and then see if we can work together.

One thing I do find particularly hard is promotion – I feel like I’m posting too much, spamming people’s feeds and somehow being needy! Other people might enjoy the hustle but for me it’s like a barrier I need to get over. I’ve also learned to limit the numbers on workshops as having too many people is overwhelming – so now I keep it to eight. Future plans include having somewhere regular or do different levels, beginner, intermediate, and advanced – for now it’s just beginners – I’d also like to do all day workshops. 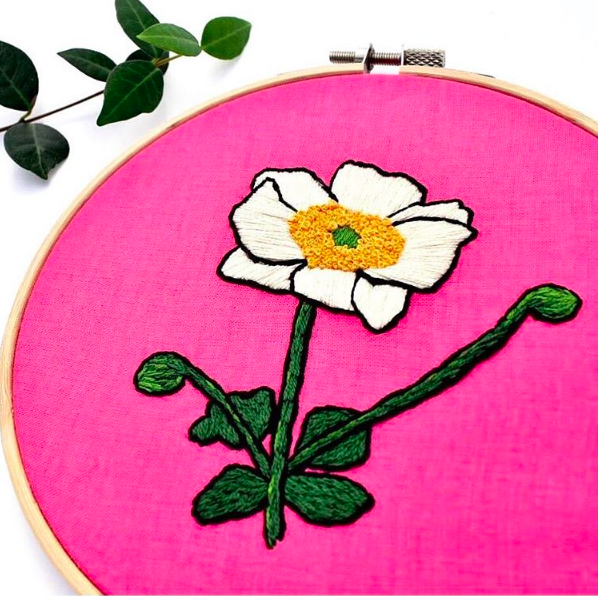 There are other people doing workshops for craft – they are my competition. So although I’m not the only workshop in town I always think – there are loads of nail salons but only one WAH Nails – I want to be the WAH of craft. I don’t want to do workshops in any crap places – they can’t be too noisy, the chairs need backs and I need good lighting. I’ve got to be fussy – it’s my brand, it’s not just embroidery – it’s Embellished Talk – a certain look.

Instagram is so weird. Pics of my own work doesn’t get many likes. Other peoples’ work gets loads – Louis Vuitton or amazing couture – a few likes.  I don’t understand the algorithm – the time of the posts isn’t chronological – I sometimes think about what’ll be next. I’ve focused on Instagram the most because you get instant likes and because it’s free. I went to a talk about fashion marketing at LCF and they said; don’t rely on Instagram – use Pinterest as well because you can use more links – Instagram links aren’t reliable as you only have one in your bio and people don’t click through. I personally love couture and very high-level embroidery – I base my feed on images of beautiful high fashion stuff but the posts that generate the most likes are the hoop embroidery – close up of flowers –  by far. Emails and newsletters are also a tool I want to use more. I send out emails using my own account so the next step would be to use a Mail Chimp type format and get more subscribers.

Everyone says corporate events are a good way to make money and I have experimented with this. It’s so interesting who will pay for what. I’ve had start-ups pay whatever I ask them and then I law firm who quibbled over everthing – wanted to not pay £50 for materials so in the end I didn’t do it. It’s interesting and funny who will pay for what. Although I want to get paid, I also want to teach people who are into it and want to be there!

One mantra/motto I use is don’t be afraid to ask, if you don’t ask, you don’t get and always ask for a little bit more because why not!?”